The Price Mansion, now known as the CAP Building or CAP Tacloban, is located at corner Justice Romualdez and Sto. Niño Streets, Tacloban City. This building was the residence of Walter Scott Price and his wife Simeona Kalingag and their children. 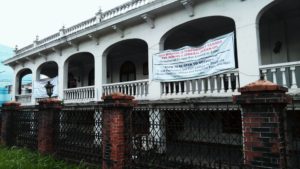 General Douglas MacArthur put up his official headquarters and residence in this mansion during the Liberation period in 1944. During that period, Tacloban was both the general headquarters of the liberation forces of the United Stated of America and the seat of government of the Philippine Commonwealth. 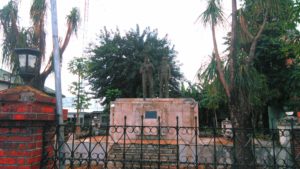 The MacArthur and Osmeña statues are standing tall with the magnificence of the CAP Building (formerly Price Mansion) as its backdrop. This serves as a memory and representation of the commitment to the democratic process and structure.

Walter Scott Price is a native of  Philadelphia, Pennsylvania. He was a member of the US Army assigned in the Philippines in the onset of the Spanish-American War. Camp Bumpus in Tacloban was his last assignment before he obtained honorable dismissal from the army after the war ended in 1901. He met and eventually married Simeona Kalingag from Cavite on January 1,1901 right after the war ended. He built a palatial home in Tacloban for his wife and their 11 growing children. Walter Scott died on March 18, 1945 at the age of sixty-eight (68) years while Simeona, his wife, died on August 30, 1973, four and a half months after her one hundredth (100th) birthday.