Brigada Eskwela 2019 has finally started. The activity which is hosted by the Department of Education kicked off on May 20, 2019 with the theme, “Matatag na Bayan para sa Maunlad na Paaralan.” The nationwide activity will last until May 25. It intends to utilize the stakeholders’ efforts and time to prepare the facilities in the near opening of classes on June 3. 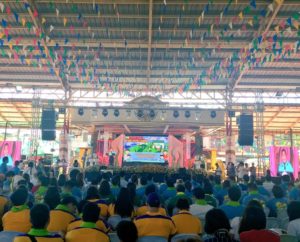 The Brigada program is also in conjunction with the National Schools Maintenance Week. As the Secretary of Education, Leonor Briones emphasized,

“More than painting or cleaning schools, we must also ensure that we provide our learners with the essentials of quality basic education.”

The official national launch was held at Alfonso, Cavite last May 16.

DepEd also expressed that this year’s Brigada Eskwela will focus on the disaster and risk preparedness of the schools amidst the recent incidents in the country.

In addition, Secretary Briones announced the Oplan Balik Eskwela 2019 which is expected to start next Monday, May 27. The OBE program will continue until the end of the first week of June. She also stressed that the OBE is part of the Department’s efforts to ensure that learners are already properly enrolled and able to attend school by the first day of classes.

Meanwhile, Deped Region VIII launched their official ceremony at Triana Elementary School located in Limawasa Island, Southern Leyte. Officials from both regional office and the 13 schools’ divisions were present in the activity.

Regional Director Ramir Uytico encouraged anyone interested to support the schools and volunteers to coordinate with the Education Support Services Division of the regional office, social mobilization, and networking section under the Schools’ Governance and Operations Division in schools’ division offices, or the school principal of the beneficiary school, for guidance.

Kudos to DepEd, the community and volunteers for their unending efforts and sacrifices for the benefit of our learners!

How did the Brigada Eskwela go in your area? Share your experiences and promote our government’s objective of clean, safe, and child-friendly schools.