June is fast approaching. The main streets of Tacloban City will once again be full of light and colors!

Filipinos love festivities. There are many celebrations around the country where you can enjoy and immerse yourself in Philippine culture. And this June, Tacloban City, being the heart of Eastern Visayas, will be celebrating one of its grand celebrations—Sangyaw Festival. And you better not miss it out!

Sangyaw is a religious event held annually every June 29 in Tacloban City. The name translates ‘to tell/proclaim the news ’ in the native Waray language. It was first held from 1974 to 1986. However, it was cancelled in the following years. By 2008, the city government under Mayor Alfred Romualdez revived the occasion and up to this day, it is one of the region’s prominent celebrations. 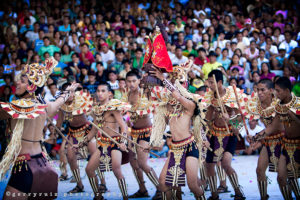 Street dancing performance during the day

One remarkable feat of Sangyaw is the participation of several municipalities, other cities, and even tribal groups. Everyone is generally welcome in the city, whether from Tacloban or not. Their cooperation enables many to witness different cultures during the fluvial parade. The procession also exhibits street dancing performances and historical colors. Plus, if you’re lucky enough, you can witness some celebrities and pageant candidates who also take part in the joyful parade. 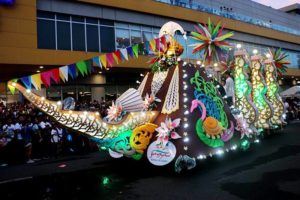 And the Festival of Lights at night

As the Home of the Happiest People in the World, everyday is a happy day in Tacloban. The city night echoes with the lively music of the Warays and OPM bands. There is no street that doesn’t get any happier than this. Literally, everything makes sense in the anticipated Festival of Lights. It’s not just an ordinary queue of people holding all sorts of light. It’s more than that. Really, there is something imbued in those people that makes the lights shine brighter in front of everybody’s eyes. In addition, the Waray artistry shown in the huge floats is worth a thousand shutters.

The festival is also a  form of thanksgiving to everyone, especially to God for the graces he has showered unto the people of Tacloban–a sangyaw for the blessings the city has received within each year. So mark your calendars people! Prepare and get ready for Tacloban’s finest celebration this coming June!