This 2.16 kilometer-long bridge connects the islands of Leyte and Samar. Formerly called the Marcos Bridge in honor of the late Pres.sident Ferdinand Marcos, the San Juanico Bridge is the longest bridge in the Philippines. It is also said to be a gift of the late president to his wife who was a resident of Tacloban City during her youth.

This project is worth $21.9 million-dollar bridge and was contracted to the Construction and Development corporation which is now the Philippine National Construction Corporation together with the Japanese engineers who conducted the studies and designed the actual project under the administration of President Ferdinand Marcos. The construction lasted from 1969 until 1973.

In spite of the damages it sustained during the devastating super typhoon Haiyan, commonly called Yolanda, last November 08, 2013, the bridge stays operational and strong. 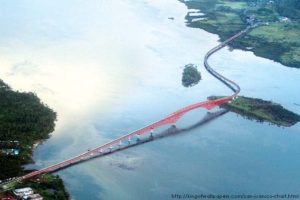 From an aerial view, the shape of the bridge is letter “L” when you are approaching Leyte side and letter “S” on the part going to Samar. 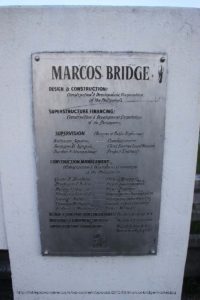 San Juanico Bridge was formerly called Marcos Bridge because it was built under his administration.

The Bridge of Love

The bridge serves as the birthday gift to the wife of the late President Ferdinand Marcos, Madame Imelda who was known as the Rose of Tacloban. President Marcos considered the bridge as the most special gift to Madame Imelda.