Here is the top 6 question and answer portion of the 65th Miss Universe Pageant. The candidates of Colombia, France and Kenya gave their answers through a translator. 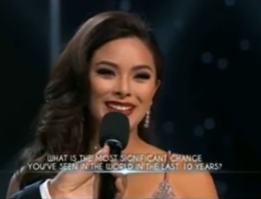 Question: What is the most significant change you’ve seen in the world in the last 10 years?

Answer:  In the last 10 years of being here in the world, I saw all the people bringing in one event like this in Miss Universe. It’s something big to us that we are one. As one nation, we are all together. Thank you. Maraming salamat po.

Question: Arguably, no United States president has had a more active first 10 days in office. What are you most excited about and what most concerns you when it comes to the presidency of Donald Trump?

Answer: Politics [giggles] is… Okay, let me just start again. Donald Trump has been elected as the president of the United States. He may not be the choice of many people living in the United States because of the divided support system for the outgoing president, Barack Obama who supported an upcoming woman president, who was supposed to be a woman president, Hillary Clinton, so so many people opposed his position. But I feel that once he took up his position, he was able to unify the entire nation.

Question: Name a current or past leader whom you admire, and why?

Question: Given today’s worldwide refugee crisis, do countries have an obligation to accept refugees or do they have a right to close their borders? 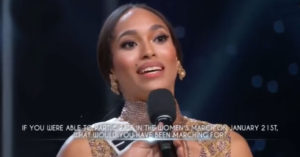 Question: On January 21st, an estimated 4.8 million people marched worldwide for human rights, women’s rights and other issues. If you were able to participate, what would you have been marching for?

Answer: Hello, everybody. One of my, one of the women I admire in the world is Eleanor Roosevelt because she fought so much for human rights. And I feel that that’s what we need in the world. We are just one. A hundred thousand years ago, 6 species of human lived in the world. Now, we are just one and we all need each other and we need to respect each other. 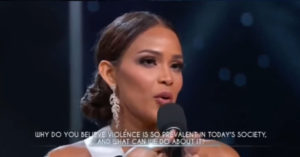 Question: Why do you believe that violence is so prevalent in today’s society and what can we do about it?

Answer: Well, I come from a country that does have violence, and this is my reference point. And although there are presidents who don’t get along well with others, we work together to be able to unite. Campaigns, respect and inclusivity to be able to have a social transformation that will educate our children. Thank you very much.