May is considered the month of fiestas in Region 8, specifically in Leyte. The fiesta, while not a uniquely Filipino tradition, is one of the main cultural and religious events in the province. The word fiesta  was borrowed from the Spanish fiesta, which means feast in English. The celebration is one of the major influences of the Spanish era in the country. It has been rooted to our culture since our colonization.

Each barangay has a fiesta, which mostly coincides with the feast day of their respective Patron Saints. There are also other months when fiestas are celebrated, but May is considered by the townspeople to be the ‘masagana month’ since almost every day is fiesta.

In every fiesta also, there are really those food which host families would never miss to serve their guests or bisita. The list includes lechon and tuba.

Lechón in Spanish is a pork dish in several regions of the world, most specifically in Spain and its former colonial possessions throughout the world. Lechón is a Spanish word referring to a roasted suckling pig. Lechón is a popular food in the Philippines. In most regions of the Philippines, lechón (also spelled litson or lichon) is prepared throughout the year for special occasions, festivals, and the holidays. Visayan lechon is prepared stuffed with herbs which usually include scallions, bay leaves, black peppercorn, garlic, salt, and distinctively tanglad (lemongrass) and/or leaves from native Citrus trees, among other spices.

As they say, fiesta would never be complete without lechon on the table. 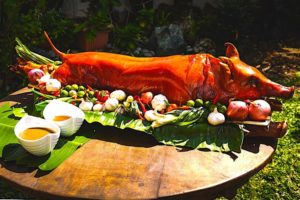 These are the lyrics of the song Bahal na Tuba, a Visayan song which describes tuba, a famous drink in the Visayas region, and a perfect pair for kinilaw and sinugba. Tuba loved by many Leytenos for its unique taste. 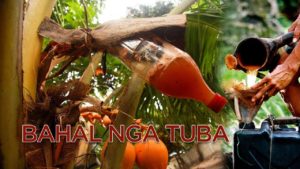 Curios about the calendar of fiestas in Tacloban? You might also want to check out the photo below. 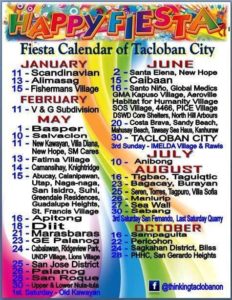