Alright boys! There’s a large possibility that your girlfriends are going to drag you to this movie. So here’s a movie review of “Imagine you and me”! I know this review is late. But better late than never, right? This movie stars the AlDub love team namely Maine Mendoza AKA “Yaya Dub” and Alden Richards. The story revolves around Gara (Maine Mendoza), a woman in her 20s trying to make a living by working various jobs in Como, Italy. She takes care of dogs, old people, houses, and other jobs we typically view our OFWs to be doing in a foreign country.

Imagine you and me is definitely a chick flick. No question there. I’m not gonna lie, I came into this movie expecting the same ad filled movie as their previous movie “My Pabebe Love” and that the executives will milk out the love team’s popularity. Basically I didn’t have a lot of good expectations for the movie. The first half hour of the movie was moving slow. It came to a point when I felt sleepy. A good movie shouldn’t make you sleepy!

However, as the movie went on, I was surprised to find myself laughing at some of the jokes. The movie also had a good story line. There was this one particular scene that I liked. It was when Gara was cleaning the house of her employer while unknown to her, Andrew (Alden Richards) was in the same house, but they never really saw each other all throughout the scene. What’s interesting with the scene is that sometime in the middle of it all, you start thinking “Wait, is all this just one shot?!”. There 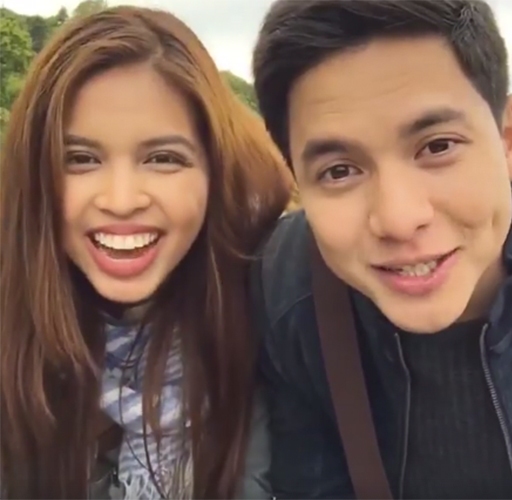 weren’t any cuts all throughout that scene. I believe this was the first time I’ve seen a Filipino made movie using this technique. I’ve seen it dozens of time in foreign films, but I think this is a first for me when it comes to Filipino movies. Good job, director Mike!

Character development was pretty OK. Basically, you only need to know the background story of Andrew and Gara. Which I feel they conveyed well enough. You kind of get what both of these characters are going through. Although you’re going to find Andrew a bit of a jerk at first.

Supporting characters, mainly Gara’s friends, were mainly there for comic relief. The movie doesn’t even tell you what Gara’s friends do for a living anyway.

The movie had a great story line. Jokes are well placed. Jokes don’t feel like they’re shoe horned in.  A bit slow at first but gets momentum over time. I’ll say that this movie is worth watching. You’ll definitely make your girl happy.