Our national hero, Jose P. Rizal, celebrates his 158th birthday on Wednesday. Born on June 19, 1861, José Protasio Rizal Mercado y Realonda was a Filipino nationalist and polymath during the tail end of the Spanish colonial period of the Philippines.

Every June 19 of each year, his life and works, especially his role in the Philippine Revolution, are honored and remembered by the Philippines. He is famous for writing his novels entitled Noli Me Tangere and El Filubusterismo which fueled the Filipinos’ desire to break free from Spanish colonialism. 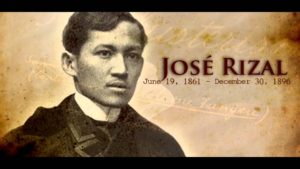 This year, however, Rizal is not only remembered by the Filipino people, but also by the renowned online search engine Google. Google, known for making doodles in commemorating significant events in the Philippine history, celebrated the national hero’s birthday by making a special doodle.

“Today, Rizal is remembered as a Filipino national hero whose expression of love and devotion for his nation in his novels, essays, and articles inspired a revolution,” Google said.

A quill is shown on the left side of the doodle. Google added that the quill is a powerful tool that Rizal used in his works and writings as he fought for the freedom of the Filipinos. On the right side of the doodle, a magnifying glass was used to represent his time as a practicing ophthalmologist. On the bottom, one can also see two books, likely representing the hero’s two novels, Noli Me Tangere and El Filibusterismo.

The online search engine also shared the life and works of Rizal in its press statement on Wednesday.

Credits to the owner of the photos.